What if Coca-Cola was a glass design workshop, which invented the ideal bottle, but had nothing to fill it with?

If another company had bought the bottle and filled it with the most popular cola drink, would we even know the name Coca-Cola? Probably not. Much in the same way that only true design history enthusiasts or people who Google “designer of coke bottle” (such as me) know the name Raymond Loewy.

This is indeed an extreme example and a rather irrelevant one to Pepsi enthusiasts, but the moral of the story is that design on its own can sometimes lack content. Literally. What good is a website as intelligent as Iron Man’s Jarvis, as pretty as the sunrise on the moors or as expensive as the wall between Mexico and the States, when it is filled with good old “Lorem ipsum dolor sit amet, consectetur adipiscing elit”? As a matter of fact, the latter used to be adequate content – when Cicero wrote these lines in 45BC, he would probably not have guessed that they will become the go-to dummy text in printing 1,500 years later, and stay that way for at least half a century more.

Thus – content. Story. Text. Context. Background. Message. Call it what you will. There has to be something inside the Coke bottle. The same way a great-looking website has to have a point. Content is sometimes replaced with pretty pictures. That is a problem, because in the “big picture”, images and text should be equally important.

We will also struggle if content is all we have. They don’t sell Coca-Cola in plastic bags. Millions of bytes of information is difficult to present without a frame or format to fit it. We would end back in the time of singers who walked from villages to villages and sang what they learned during their previous stop or what they remember from their grandpa’s songs. Not the fastest way of letting your customers know about your newest product or service.

The phrase “there’s no point” is negative on its own. Imagine someone saying this about your website. Yes, it’s pretty – but there’s no point in it. What is all this beauty for? An ad campaign that fills the town with pretty posters and embellishes the Independent’s website with amazing banners will not bring back a cent if the buyer forgot to add who ordered the ad or why they ordered the ads in the first place. To sell – sure. But what? And to whom?

This is why we are taking the next step to combine design and content better than before. To get the design and your actual content supporting each other, we will now help you plan and revise your content, as well. We can help revamp old ones or create new messages, if need be. We will also help you think about your public relations aspects to support the visual side, and the visual aspects that would support your PR efforts. From now on, we offer content and design side-by-side. Call it a new approach to design, if you will – the correct bottle with the right content. 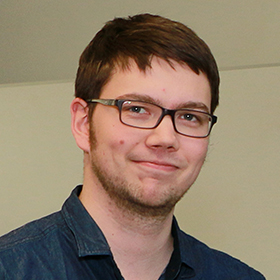 Karl is a PR guy with a few degrees and years of experience in all three sectors. He has been a lobbyist, a PR manager and a freelance consultant. His party piece is crisis communication, especially the first part - avoiding crises.
karl@sviiter.ee